Residential entry doors generally come in the following standard widths:  24” 28” 30” 32” and 36.”  These widths are usually higher than the actual clearance to get through a door due to door stops and door opening angles.  This means that a 24” wide object will not quite fit through a 24” door without some type of modification the object or door.

This is significant because most walkers will NOT fit through a 24” bathroom door way without some type of twisting motion by the user.  Depending on the user’s balance and size, this may not be safe or practical, requiring a widening of the bathroom entry door.  Wheelchairs will not fit through any doorway less than 30” wide – and even a 30” door way is a VERY tight fit.  A bariatric wheelchair will require a minimum 36” doorway.

Widening a bathroom door generally means reframing the door opening and purchasing a new door, finished and trimmed to match the existing.  Door widenings often require the moving of electrical switches and dealing with floorcovering which will show gaps after the door is re-framed.  There are a number of ways to handle this situation depending on budget, style and practical need.

When a doorway widening is a matter of two inches or less, there may be some options to widen without the more expensive and involved widening projects.  Options to avoid reframing a doorway (and dealing with the attendant structural, electrical and flooring issues can include:

Generally the most significant (and expensive) consideration in accessibility related bathroom remodeling involves showering/bathing accommodations.   While some users insist on retaining a bathtub, the majority opt for tub to shower conversions  for practical and financial reasons.  For shower decisions related to accessibility, we return to the question of how the user will enter the shower.

Will the user be entering the shower in a wheelchair?  (as opposed to transferring to a shower chair or bench.)

(YES):  If the answer is “yes”, then a roll-in shower is greatly preferred; that is, a shower with no threshold.  When a wheelchair is used in a shower, both the elimination of an entry threshold and the size of the shower become important considerations.  Shower thresholds are in place to contain water, so their elimination naturally raises the question as to how water will be retained in the shower, and this is perhaps the greatest challenge to zero-threshold showers.  Generally, this is accomplished through one of two ways (or a combination of both):  floor slope and size and a collapsible water dam.  The water dam, shown below on the Best-Bath shower, is a flexible rubber piece that attaches to the shower base surface and can be stepped on or rolled over.  When used in combination with a carefully placed heavy duty shower liner, it can be effective in retaining water.

Both methods of water containment rely on a carefully constructed slope toward the drain.  Slopes that become too steep are a safety threat to shower users while slopes too gradual may not allow water to drain properly which is a serious problem in a zero threshold shower.   Proper drainage and usability means that overall shower size is very important in zero threshold showers.  Generally speaking, it would be best if this shower is at least 60” wide and 36” deep (front to back).  If leg extensions are used on the wheelchair, the 60” width is absolutely necessary – and even more width is desirable, even if just several more inches for clearance.

If the wheelchair user is not entering the shower in a wheelchair then presumably the s/he will be transferring to some sort of shower bench or chair; or even in rare cases, standing in the shower.  In this event, an important follow-up question in this situation is:

(YES):  If so, a zero threshold shower is probably not required, and this can be beneficial from the standpoint of cost, product availability and water containment in the shower area.

(NO):  If the user can’t safely lift legs over a 4” threshold then either the roll-in type shower described above will be required without some ongoing form of assistance. 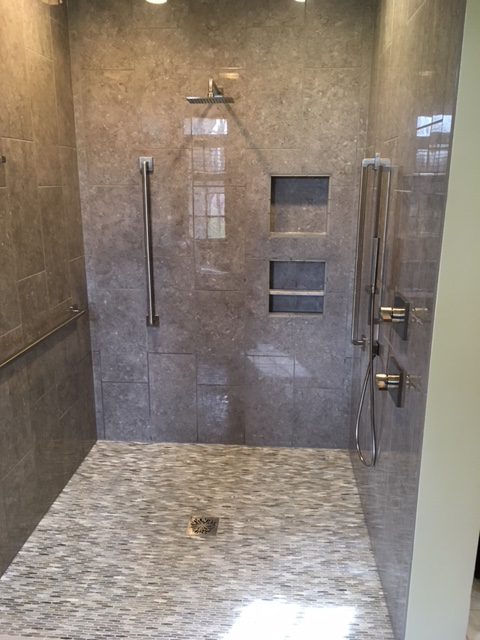 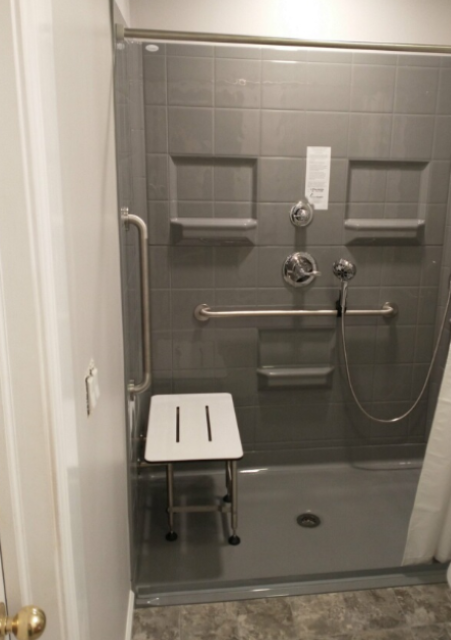 While a 60”x36” shower size is desirable in many cases, if the user is highly independent, a 48” shower may be fine, but the 36” depth – or at the least 34”, should be maintained for the user’s comfort and to help ensure water containment.  Water containment remains an issue even with curbed (showers with thresholds) since generally shower doors are discouraged in accessibility remodeling due to the fact that limiting access to the shower, forcing entry through a tighter space is not encouraged for those with any sort of mobility challenge.  This means that water containment will rely on a shower liner/curtain system, so a high quality, weighted shower liner is highly recommended.

Generally toilet height, location and assistance with mount/dismount are the most critical considerations in accessibility remodeling.  A taller (“comfort height”) toilet is usually around 16 ½” and up.  This measurement is from the floor to the height of the bowl and does not include the seat which (usually) adds another inch or so.  This seat height of 17 ½” (from floor to top of the seat) is generally tall enough for most users, but not for everyone.

Shorter users – children or adults closer to 5’ in height may find that the 17 ½” height is actually too high and would prefer the standard height toilet – usually in the 14 ½” range (15 ½” with the seat).  At the other end of the spectrum, those who have extreme difficulty bending knees or have significant balance issues may prefer even higher toilets.

One of the safest ways to achieve this is with a product that sits under the toilet for elevation adding another 4”, achieving a seat height between 21” and 22”.  We have used a product known as the “Toilevator” in these situations.  We have found them to be well designed and much more solid than the less expensive 4” plastic toilet seats which can become quite unstable (and thus dangerous for users) over time. 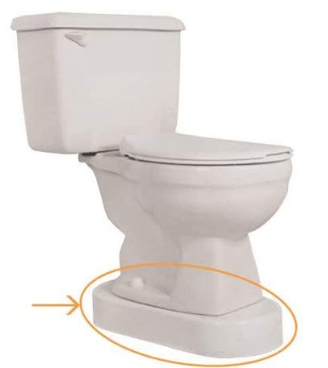 Grab bars are an important consideration in toileting.  Generally the most helpful grab bars are along the side of a toilet when wall space permits and occasionally across from the toilet when a wall facing the toilet is within reach.  Grab bar angle and placement will depend on individual user needs.

When no wall is available along the side and the front is not an option, flip up or floor to wall mount grab bars may be an alternative solution, though each has drawbacks.  The flip up grab bar is beneficial because when the grab bar is not wanted, it can be folded up and out of the way.  The challenge comes in the installation.  These grab bars must be mounted to solid blocking or even a plate mounted to wall studs.  The most common installation method involves removing drywall from either from the bathroom side of the wall (which almost always means taking the toilet out first – and then reinstallation later), or removing drywall from the other side of the bathroom wall (often a closet, another room etc.)   In either case, the removal of drywall for blocking installation requires drywall repair.  The flip up bars are usually significantly more expensive than standard grab bars and require the additional time in installing blocking, and wall repair.  If space is very tight, sometimes there simply isn’t room for a flip up grab bar, but when installed, this can be a very effective solution. 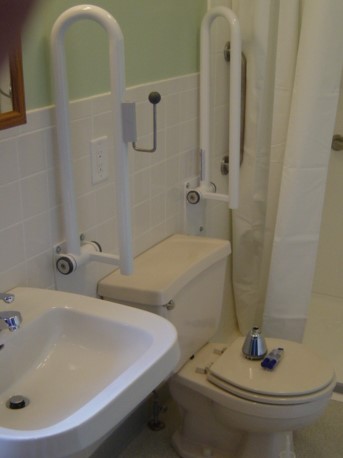 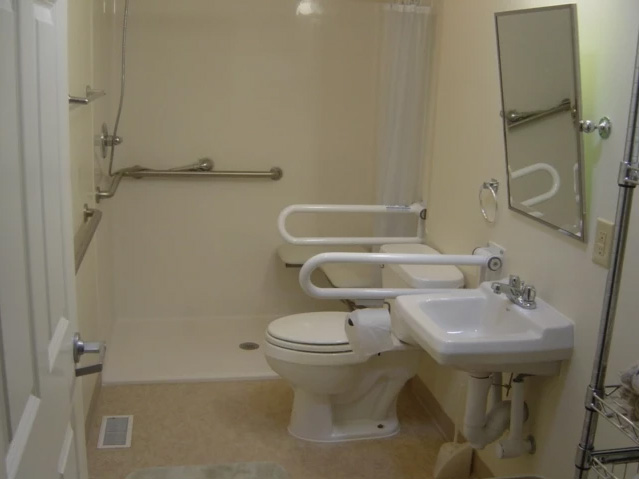 Bathroom sinks are another area that can be highly customized, but for our purposes here, we’ll mention the standard and then two common adaptations.  Once again, primary consideration here again centers on whether or not the lavatory user will be in a wheelchair.  If not, and standing is possible, then the typical vanity cabinet arrangement is usually preferred due to the benefit of storage, countertop space and stability.  When the lavatory user must access from a wheelchair, this often involves rolling under the sink to get close enough for shaving/washing/teeth brushing, etc., and in such cases, vanity cabinets are often an impediment.

When the vanity cabinet is eliminated, the most common type of lavatory in residential bathrooms is the pedestal sink which permits a wheelchair user to slide under the sink bowl another 10” or so which provides enough access for many users. 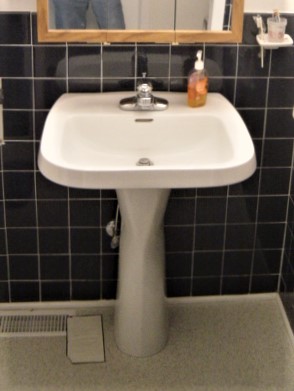 Pedestals sinks, however, can create a problem for wheelchair users particularly when leg extensions are needed.  Such users may hit the pedestal which in turn can “cock” the lavatory, leading to damage. Although pedestal sinks are wall mounted, they can be shifted when enough force is applied to the pedestal.  When a user is trying to maximize the amount of clearance under a sink, the wall mounted lavatory is the preferred option, some of which can be quite deep (from front to back) and wide as well.  There are additional adaptions possible with fabricated wall mounted counter tops that can add space for the user without requiring any floor support. 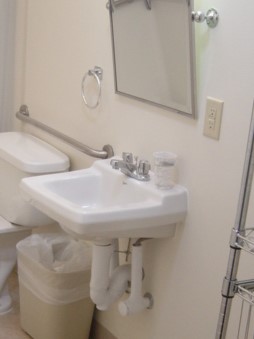 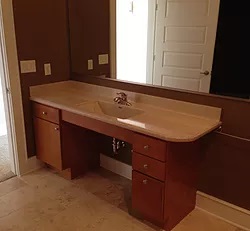 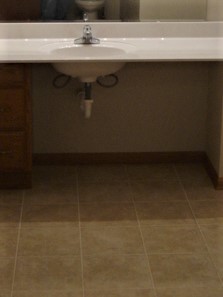 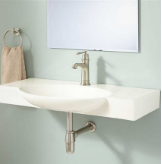 Lighting is an area often in need of attention, especially in older residential bathrooms.  Often the lighting is especially inadequate in the tub shower areas with bathrooms having one dim overhead light and perhaps a vanity light.  When the shower curtain is closed (or even a shower door with obscure glass), lighting in the shower area is dim.  This is generally easily corrected with and inexpensive LED light approved for use in shower areas. 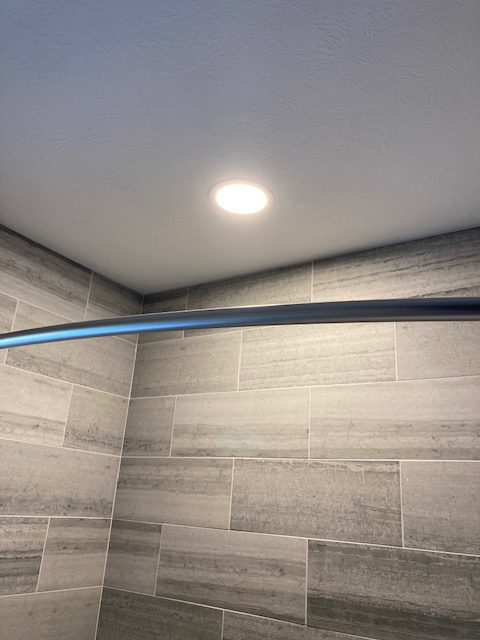 Flooring is often an issue with remodeled bathrooms especially when tubs are converted to showers and/or vanity cabinets are removed for pedestal or wall hung sinks.  It is also an issue with door widening projects as mentioned above.   While multiple types of flooring can work well in bathrooms (tile, sheet vinyl, vinyl plank, etc.), it is helpful to bear in mind three flooring considerations in addition to appearance and price: